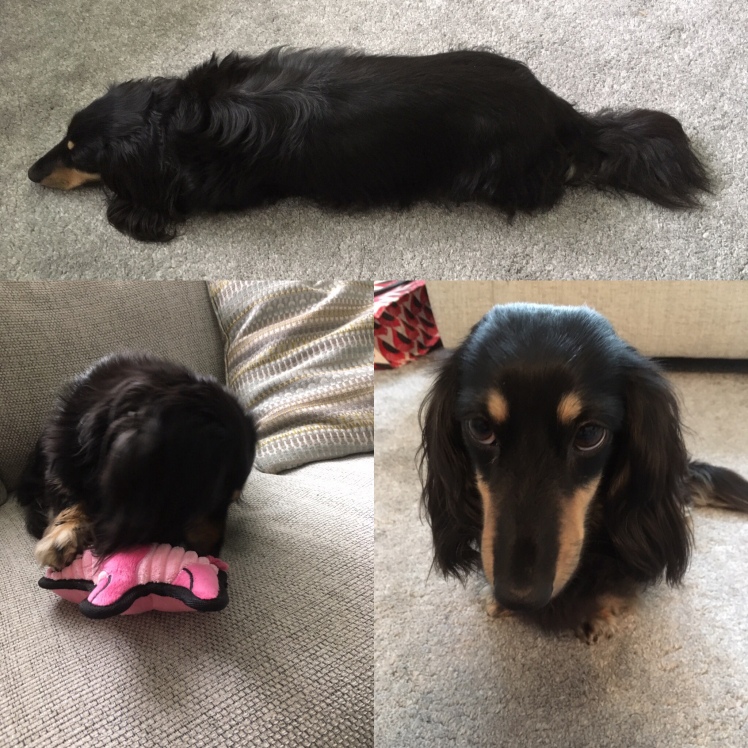 Answer: Dachshunds. You know, little legs, low tums, long bodies. Better known as sausage or wiener dogs, depending on which side of the Atlantic you’re on. All three of these famous authors owned a dachshund or two. As do I – not that I’m a literary great or anything… yet.

In fact, my precious sausage dog Bella (miniature, long-haired, black and cream – see adorable pics above) turned four years old today. Four years of defending the house from the postman, refusing to go outside in the rain, and relentlessly licking anyone and everyone that comes near her.

To celebrate, here are my three favourite fictional sausage dogs:

First appearing in Lynley Dodd’s Hairy Maclary books, Schnitzel Von Krumm – the archetypal standard dachshund with his smooth tan coat – spawned his own spin-off series where he gets stuck into in all manner of things. This is normal for Dachshunds, who were originally bred to hunt badgers, and although these days they’re primarily fancy pets, something of that impulse to burrow into small spaces seems to live on. It’s pretty common for children in the street to shout “Schnitzel!” at Bella as we walk by.

Star of Rob Biddulph’s excellent book of the same name, colourful scarf-wearing, electric guitar-playing Odd Dog Out leaves her home in New Bark City because she doesn’t fit in with all the other suited-up sausage dogs. A heart-warming tale about standing out and being yourself, I love reading this book to my son. Quirky and funny, Odd Dog Out is a seriously cool, smooth-haired brown and black Daxie. Neither standard or miniature, Odd Dog Out appears to be the size of an average human being and sometimes walks on two legs.

Long Dog is so long that he’s a nuisance around the house, until one day all the dogs at the dog park go missing and there’s only one very long animal that can help. The illustrations by author and artist James Davies are fantastic – especially the slightly horrifying one where narrator James proposes that Long Dog might actually be a snake in a costume. Long Dog is red – not as in the Kennel Club definition of red (brown), but really, really red, primary red, and presumably smooth. Definitely not a miniature, James reckons Long Dog will one day grow long enough to circle the Earth.