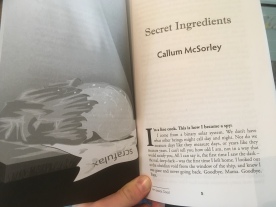 Around this time last year, I started working on a short story after reading about the death of Anthony Bourdain. His nonfiction book on the chef life, Kitchen Confidential, is a no-holds-barred look behind the scenes of fine dining written in an almost gonzo style, featuring larger than life characters, most of whom are debauched, drugged up, and opportunistically criminal. If you’re a fan of his tv series Parts Unknown (available on Netflix) then you’ve got to check it out!

I wanted to capture some of the essence of this in a story – the wild characters, the grinding work, the way that cooks often seem unsuited to any other kind of life. Bourdain compares his own brigade of cooks to a pirate crew, an idea which really stuck with me. It chimed with my own experiences of working in restaurants, including a gruelling year in the pot wash of a Spanish kitchen. (A couple of my colleagues here were neo-Nazis belonging to a Spanish far-right group, which is another story for another time, but is a good illustration of the extremes you can encounter in this walk of life.)

The result is Secret Ingredients. Set on a distant planet, line cook Grith is tangled up in a plot to steal a potentially deadly recipe from a rival restaurant. I’ve been describing Secret Ingredients as ‘Monsters, Inc. meets Kitchen Confidential’ as it’s chock full of weird aliens, a physical representation of Bourdain’s wild and wonderful buccaneers.

Aaand… you can now read Secret Ingredients in Shoreline of Infinity 15!

I’m absolutely stoked about this as I’ve been a big fan of Shoreline for ages now. Also, the line-up is incredible. Short stories from Tim Major and Teika Marija Smits, an interview with Louise Welsh, and an extract from Gareth L. Powell’s new nonfiction book on writing. It’s unreal to see my name on the same contents list. (Big thanks to Noel Chidwick and the Shoreline team!)

You can order your copy here.

Shoreline of Infinity is a sci-fi magazine based in Edinburgh. Last year it won the British Fantasy Society Award for best magazine.

5 thoughts on “Read Secret Ingredients in Shoreline of Infinity 15”