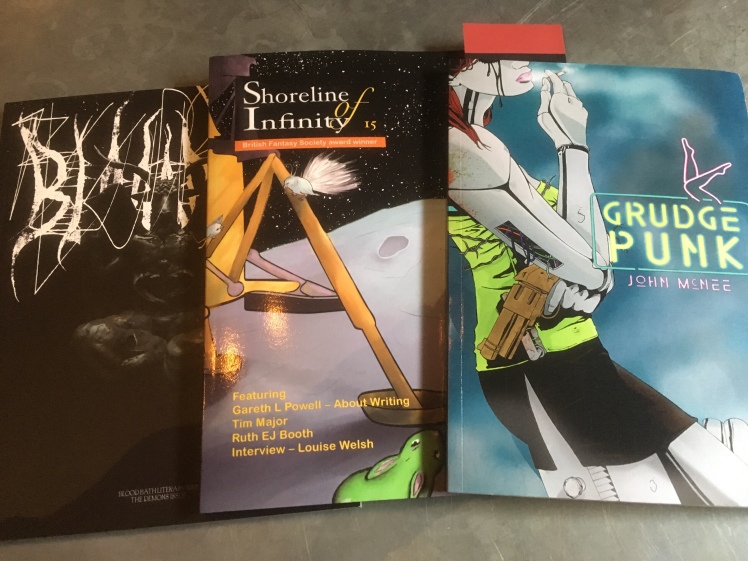 A couple of weeks ago I had the pleasure of travelling down to Edinburgh to go to Cymera Festival, Scotland’s first ever book festival dedicated to sci-fi, fantasy and horror writing.

Held at prominent Fringe venue and labyrinthian maze, The Pleasence, from 7th-9th June, some of the world’s leading SFF and horror authors, including Gareth L. Powell, Adrian Tchaikovsky, V.E. Schwab and more (seriously, it was an insanely good line-up for a festival in its first year) gave talks, readings, and even writing workshops.

I arrived on the Friday evening to see Richard Morgan, author of Altered Carbon – the 2002 cyberpunk novel that’s now a major Netflix series (Morgan says he “creamed his knickers” when he saw the first trailer) – talk about his new book, Thin Air, a long-awaited return to sci-fi after writing fantasy trilogy, A Land Fit For Heroes, which he jokingly describes as, “A story featuring gay characters in an aggressively nihilistic world… It’s not Tolkien…”.

In Thin Air, ex-corporate super-solider, Hakan Veil, hunts through the seedy underbelly of Martian cities to find an abducted government bureaucrat and a missing lottery winner. The backdrop feels a little like the original Arnie Total Recall, but the story is pure hardboiled crime with plenty of twists, gratuitous violence, and shagging.

“We’ve gone to Mars in Elon Musk mode: rapacious corporate capitalism,” Morgan says of his Martian society, a High Frontier where tech can advance without ethical constraints as long as it makes money. “I don’t want to knock Musk more than he deserves but the guy’s a fucking dweeb and you can’t give that kind of power to someone like that.” ‘Someone like that’ being a “hyper rich guy” trying to live out some Avengers/Iron Man “wank fantasy”.

Morgan laments the defunding of government sponsored organisations like NASA which have left the gap to be filled by the Musks and Bransons of the world, a situation he extrapolated to create his vision of Mars. Though, realistically, he questions why humans would even go to Mars in the first place, other than an urge to keep moving, hardwired into us at a basic level going way back to “the long journey out of Africa”, and sees the way AI has casually (and without devastating, Terminator-like results) become part of people’s lives as the most prescient aspect of his tale.

The funny and wide-ranging interview also touched on the influence of William Gibson, Morgan’s years as “a hired gun for EA” getting in and out of limos, and how fatherhood has affected his writing (things go slower when you have a kid, something I now know all about!).

Saturday, I visited the creator’s hall, where I picked up my contributor’s copy of Shoreline of Infinity 15 (it features my short story Secret Ingredients), a copy of Blood Bath Literary Zine Issue 2, and a short story collection called Grudge Punk by horror author John McNee, who was good enough to sign my copy.

Arriving at the bar in the afternoon to read at the open mic (I performed a flash fiction piece called ‘The Valley’, prepared specially for the event), it was a pleasant surprise to find the aforementioned Mr McNee was also there to perform. There were excellent, original readings by McNee, Hannah Faoilean, Joyce Meggett, Mark McGarry, and M.E. Rodman, and even some Star Wars fanfic about the inner life of Darth Sidious when the mic was thrown open to the crowd.

Rounding off the trip with a panel on modern horror featuring Sarah Lotz, Louis Greenberg and DA Watson, chaired by Gingernuts of Horror blogger, Jim McLeod, I headed back out into the pishing Edinburgh rain to get the bus home, my backpack heavier than when I arrived, and buzzing from the wonderful atmosphere of the festival.

Cymera is the incredible work of festival director Ann Landmann and will hopefully be back next year!

3 thoughts on “Cymera, Thin Air, and the inner life of Darth Sidious”